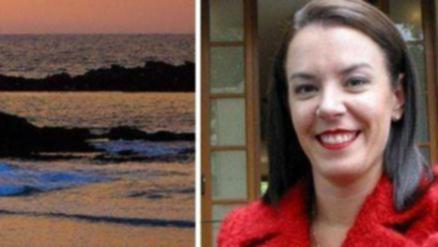 Human flesh has washed up on a NSW beach five days after a foot later confirmed to belong to fraudster Melissa Caddick was discovered.

Beach walkers made the gruesome discovery of human flesh about 9.30pm on Friday at Mollymook Beach.

Forensic DNA analysis will be undertaken to see if the remains are linked to Dover Heights woman Ms Caddick.

It comes after police on Friday announced the bombshell development that campers found Ms Caddick’s shoe at Bournda Beach, south of Bega, on Sunday.

Her identity was later confirmed by DNA testing using her toothbrush.

The Asics shoe, matching the description of what she was wearing when the corporate watchdog raided her home in November, was found washed up on the sand and the heavily decomposed remains of her foot were inside.

Police would not completely rule out foul play despite the more likely possibility Ms Caddick may have taken her own life.

“We’ve been keeping an open mind all along … but given the fact she left personal belongings (behind) we’ve always considered the possibility she may have taken her own life,” he told reporters.

Ms Caddick is accused of swindling clients, including friends and family, out of millions of dollars through her finance business Maliver Pty Ltd.

It’s alleged she used the cash to fund her lavish lifestyle, which featured luxury ski trips and designer jewellery.

Earlier in the week the provisional liquidators sifting through Ms Caddick’s affairs revealed the alleged tangled web of lies and fake documents they believe she used to dupe investors before vanishing into thin air.

On Monday the Federal Court heard there was a “significant shortfall” between the millions investigators allege Ms Caddick owes devastated investors and the value of her own luxury assets.

Bruce Gleeson and Daniel Soire, of Jones Partners, were appointed as provisional liquidators of Maliver and as receivers of her property in December.

While addressing the media on Wednesday, Mr Gleeson said there was little doubt Ms Caddick had used investor funds to live an extravagant lifestyle, including splashing out on property.