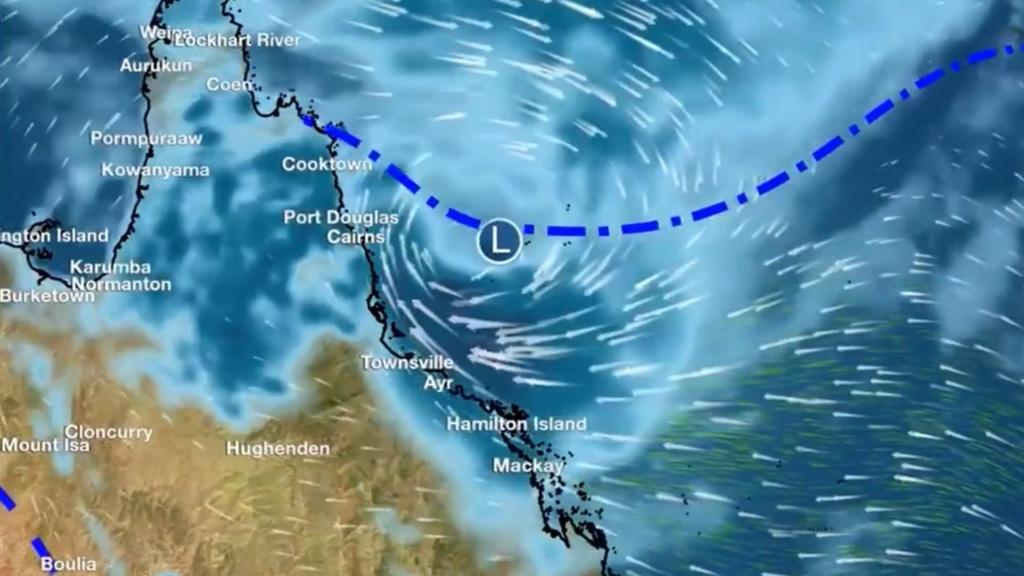 A low pressure system is stalking off the coast of North Queensland, providing a threat of a potential cyclone and flooding.

A flood watch warning is currently in place between Mission Beach and Rollingstone to the north of Townsville with an unpredictable weather system threatening to bring damaging wind and rain in the coming days, according to the Bureau of Meteorology.

“In the northwest Coral Sea a tropical low that’s embedded in the monsoon trough is currently sitting pretty far offshore and to the north with the potential for cyclone development, particularly as we come through the early days of next week,” meteorologist Kimba Wong told NCA NewsWire on Saturday morning.

“Its proximity to land will very much be a determining factor in how quickly it might develop and exactly where it might be, so there's uncertainty in the position and the movement.”

Ms Wong said the cyclone could develop by Tuesday and urged residents to keep an eye out for warnings in the coming days.

“Of course, we're in cyclone season and once these tropical lows form they can spin up quite rapidly,” she said.

“So it's a good idea to keep up to date with the latest forecasts and warnings.”

The unpredictability of the weather system creates an element of significant risk, but Ms Wong said the current trajectory suggested it would remain offshore above the Coral Sea.

“Modelling guidance suggests it may linger off the northeast coast of Queensland for a couple of days before moving off to the southeast,” the meteorologist said.

“If it does form up into a cyclone it looks like it will most likely stay offshore, but of course that may change because there is an element of uncertainty there.

“What that means for Townsville is if that system comes closer to the coast, it could bring quite significant rainfall to the region but if it does remain just a little bit further offshore it may lead to offshore winds and very much reduced rainfall.”

Cargo ship back in Australia after engine fire