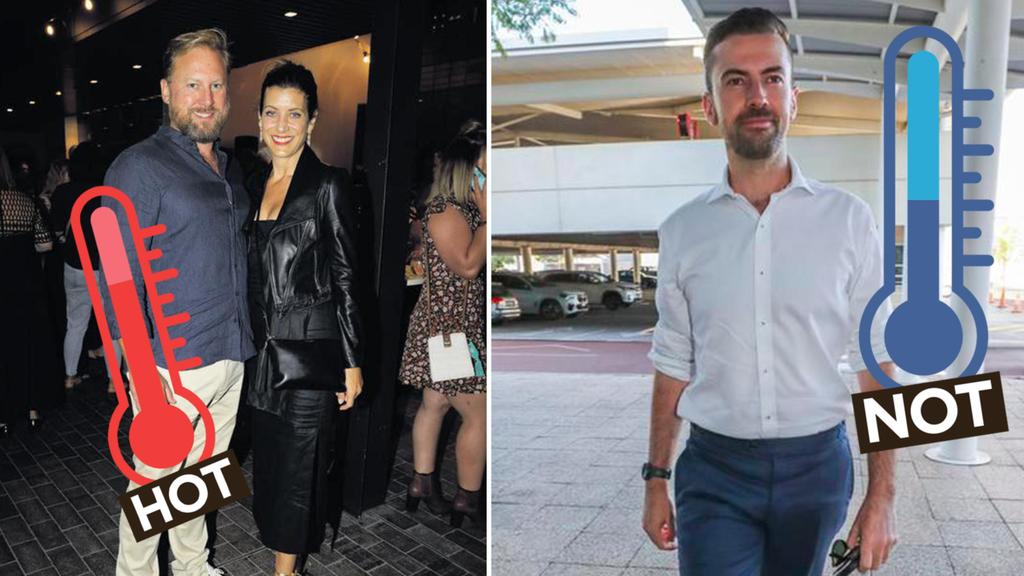 It’s been a topsy-turvy week in news, from new beaus to breakups and everything in between.

Hollywood mega-star Kate Walsh’s romance with a humble West Aussie farmer was revealed, while it looks like game, set and match for tennis player Nick Kyrgios and his girlfriend Chiara Passari following some explosive Insta posts.

Things heated up with news nude yoga had landed in Perth, as the iconic City to Surf fun run was put on ice for another year thanks to COVID-19.

So, here’s what’s hot, and what’s not this week.

Hollywood A-lister Kate posed for the first time in public with the beau who brought her to WA.

The Grey’s Anatomy star, who has been bunkering down in Perth since the COVID-19 pandemic began, was lured to the State last March by Moora farmer Andrew Nixon.

We love a bit of star power here in our State, but let’s hope Perth doesn’t turn into another Byron Bay.

The workshops do not follow the format of a traditional yoga class, instead seating attendees in a circle where they can speak about body image before removing their sarongs.

We’d all love to be gallivanting around the world, but one thing the pandemic has reminded us of is how beautiful our own backyard is.

Exmouth was this week named the top travel destination in WA.

The resort town, which boasts magnificent sites such as Ningaloo Reef, was named WA’s Aussie Town of the Year by Wotif, an Australian domestic travel service.

Yep, Mr Popular. From crashing a wedding, to his Liberal rival Zak Kirkup admitting defeat ahead of the State Election all in the same week, it seems Premier Mark McGowan can do no wrong.

The rockstar premier had been attending an official event at Crown Perth last week, and was spotted leaving by guests of a wedding reception being held in a neighbouring function space.

The revellers asked the Premier if he’d pop his head in to surprise the bridal party and, being the good sport he is, Mr McGowan obliged. Mark McGowan isn’t just hot right now, he’s on fire.

Mark McGowan topped it off with a strong performance during Thursday night’s State election debate against Liberal leader Zak Kirkup, declared the winner by The West.

Yes, we know Hazy IPA’s have been hot for a while now, and for good reason, their full juicy flavours are perfect for the hot Aussie summer.

But what you haven’t yet read is our resident beer writer Simon Collin’s review on Stone and Wood’s Holy Grain Honey Toasted Hazy IPA.

Read his verdict here, and decide if you should try it with your mates this weekend.

Nick Kyrgios’ girlfriend Chiara Passari this week sparked rumours their relationship is over after a fiery text message exchange was shared to Instagram.

In the tit-for-tat, Kyrgios allegedly tells his ex “you disgust me” and “good luck”.

In the last screenshot shared by Passari, she’s told: “Be in Canberra the rest of your life.”

Daft Punk break up after 28 years

Speaking of break-ups, Daft punk broke hearts around the world this week when they announced they were calling it a day after 28 years.

Surely COVID-19 is running out of things to take away from us!

One of Perth’s biggest mass participation events, the City to Surf, was cancelled for the second year in a row due to the ongoing pandemic threat.

Bin bandits hit recycling to cash in on Containers for Change

WA’s Cash for Containers scheme has proved to be a great money-spinner for kids’ piggy banks and community groups but it also seems to have birthed a new neighbourhood nuisance — the bin diver.

The scheme seems to have motivated a few people to step over the line and raid other people’s bins in search of recycling gold.

No one wants someone pawing through their garbage, rattling bottles while they’re trying to sleep.

But it wasn’t Kirkup’s promises or policies that got people talking, it was his lack of a tie.

The Opposition leader opted for a more casual look during the debate, with many viewers seeing it as a sign of defeat.