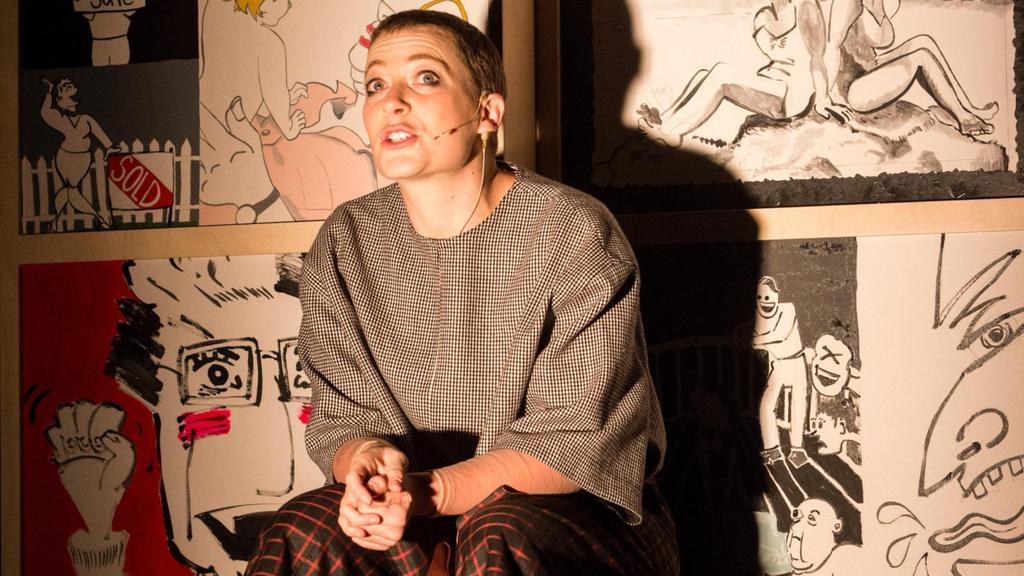 South African theatre-maker Jemma Kahn takes audiences on a Contiki tour of emotions in ‘In bocca al lupo’, the third instalment of her kamishibai trilogy.

Think of it as analogue television, although a skilled practitioner such as Kahn fires the imagination far more than the idiot box with four panels switching between illustrated cards.

And ‘in bocca al lupo’, which directly translates as “into the wolf’s mouth”, is the Italian version of “break a leg”.

South Africa. Japan. Italy. There’s three countries without leaving the discomfort of your folding chair in the basement bar of the Rechabite in Northbridge.

Kahn also takes us to Ireland, specifically Galway where she travels to live in a drug-addled and mould-coated share house with a boyfriend, who may be literally toxic.

While her universally acclaimed kamishibai debut The Epicene Butcher told macabre short stories and follow-up We Didn’t Come to Hell for the Croissants saw seven writers each tackle a deadly sin, ‘in bocca al lupo’ is memoir. (All three are part of this year’s Fringe World.)

The 80-minute solo performance is a travelogue that begins with Kahn, a struggling actor fearing perpetual anonymity and poverty, moving to Japan to teach English.

Japanese schoolgirls, octopus biltong and the unusual quirks of etiquette (“maybe” always means either yes or no, never maybe) create acute culture shock for the Johannesburg-born star, who finds little solace in Skype calls home to her parents.

The one rock in her life is her beloved grandmother Fufu, who also did her fair share of travelling and inspired Kahn’s love of storytelling.

In part, ‘in bocca al lupo’ is a tribute to the influence grandmothers can have in the lives of their granddaughters.

In fact, if you removed a panel here or there (well, one sex-driven segment entirely) this production would not require the sign at the entrance warning of nudity and adult themes.

Kahn is such a skilled storyteller that she doesn’t need to be told to break a wolf’s mouth or whatever.

She has mastered the art of kamishibai, even if she wouldn’t allow the Japanese ambassador to South Africa tell her so.