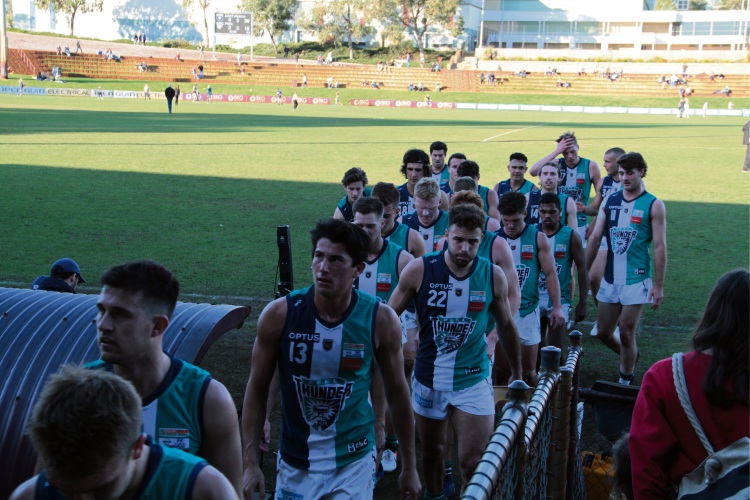 PEEL Thunder has suffered a 19-point loss at the hands of East Perth in another low scoring game.

For the second week in a row Peel has found themselves goalless at the end of the first quarter, managing just a solitary behind while the Royals kicked 3.1 to open up an early 18 point buffer at Leederville Oval.

With the initial onslaught over the game became more of an arm wrestle when the Thunder finally kicked into gear after the first break.

The teams went goal for goal for the next two quarters, but Peel couldn’t stop East Perth from extending their lead to 25 points at three quarter time.

Peel succeeded in locking down the Royals attack and stemming the flow of scoring in the final quarter, but while they kept East Perth to just four behinds they were unable to capitalise down the other end, scoring just 1.4 themselves to go down 64-45.

Lachie Schultz was the only Thunder player to kick a double, while Ben Howlett, Hayden Ballantyne, Dillon O’Reilly and Bailey Banfield scored a goal each.

Brett Bewley toiled hard across the ground with a team-high 27 disposals as Banfield (26 touches) and Schultz (22) also found a lot of the ball.

After belting Swan Districts 125-46 in round 12, the Thunder has now gone two weeks unable to score more than 50 points and have dropped to seventh on the WAFL ladder.

Forward Blair Bell said their lack of intensity early set the tone for the rest of the game.

“Our intent and our pressure from the start (was poor), we made it a focus to come out and restrict their marks but we were poor from the word go,” he said.

“It’s always frustrating when we do get the ball in but we find it hard to score, their pressure was pretty good but our skill level wasn’t where we wanted it and that just reflects it on the scoreboard.

“If we had started better it would’ve been a lot better but we’ve just got to self-reflect now and try and get back on the winning board next week.”

Ladder leaders Subiaco proved too much for Peel’s women in the WAFLW, running away with an easy 56-12 win.

After 10 rounds they remain fifth on the WAFLW ladder with just the solitary win.

They’ll next travel to take on East Fremantle from 2.40pm, July 28.