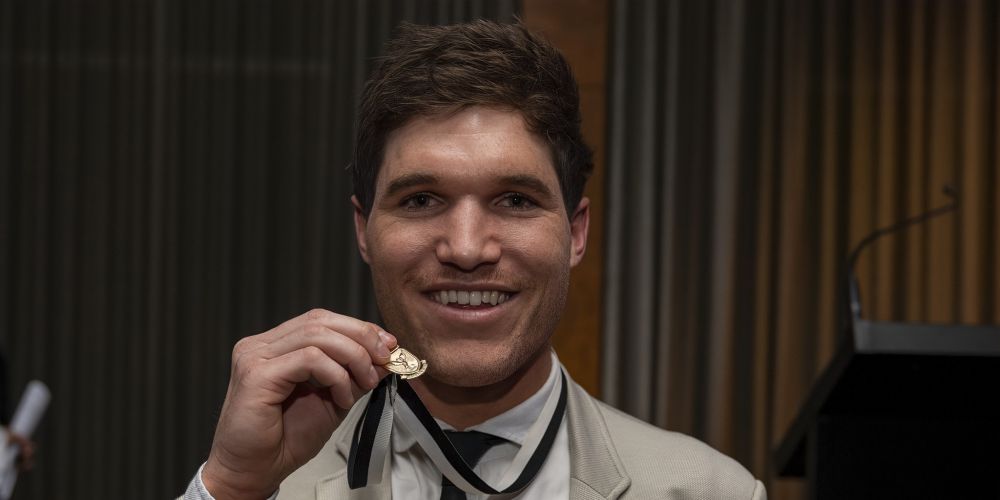 The 29-year-old midfielder-forward won the 2019 Swan Medal on Friday with 127 votes, ahead of co-captain and two-time winner Tony Notte (111 votes) and midfielder Jesse Turner (91 votes).

Hampson, who previously won one best and fairest with East Fremantle in 2018 and two with Subiaco, played every game and kicked 19 goals in his first season with Swans.

He also won a premiership with Subiaco in 2014.

The Scarborough resident said it was exciting to create his own bit of WAFL history and win the Swan Medal.

“It hasn’t really sunk in yet,” he said.

“I was happy with my personal performance and to play every game was really good for me because I haven’t done that in years.

“I see my strength as I can get my hands on the footy through the midfield and also kick goals which is where I differ from many other players.

“I’m very happy with the year and looking forward to next season.”

Hampson said Swans did not differ much from other WAFL clubs, as every club had good people and tweaks to their game plans.

“There is literally two people who I haven’t gotten along with and it turned out to be two head coaches,” he said,

“I’ve still got great relationships with guys who I played with at Subi and East Fremantle who are more from my area and I still catch up with them.

“Like any place of employment that you go into, there is always good people and Swan Districts is no different.”

Hampson said the players needed to work on the mental side of the game and doing weights in the gym.

“We will work with that throughout the summer and see what we can do to put ourselves in good stead to play four consistent quarters of football throughout the year in each and every game,” he said.

“The WAFL is a pretty high quality competition, it is the best competition outside the AFL by a fair margin.

“A bit of work needs be done but we are not far off.”

The UWA law student said he completed a commerce degree and worked in banking for five years but wanted a change.

“I’m not just a football head, I’ve got a brain behind me and that is why I have had a couple of issues with two coaches,” he said.

“I have been brought up to stand your ground and stay with what you think and that has what gotten me today, rightly or wrongly.”

He will be completing exams and heading off on a holiday before the pre-season starts on November 4.