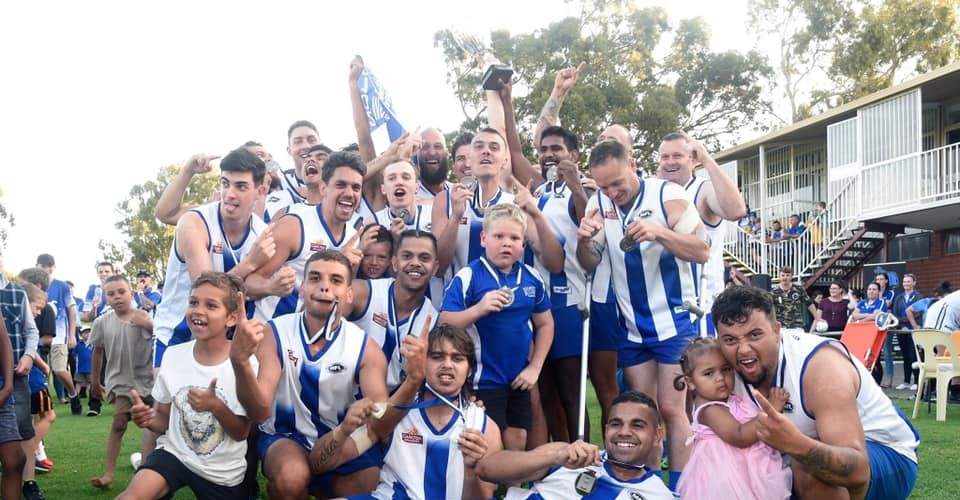 THERE are two new top teams in the Metro Football League after Sunday’s grand final matches.

Division one saw Queens Park looking to make it four premierships in a row but Kelmscott was just too strong.

With Queens Park only one point up after the first quarter, it looked like it was going to be a tight contest.

Their lead was only extended to five points at half time and seven points after the third term but a strong final quarter from the home side saw Kelmscott turn it around to take the title by 13 points.

Goal kickers for Kelmscott were Max Websdale with four and Basil Thorne and Brayden Thorne with two each, while Queens Park’s Harold Bropho kicked two also.

Thorne was awarded the Arti Hancock Medal for best on ground, with fellow players Francis Shoveller and Hakeem Flowers also named in the side’s best, while Bropho, Preston Westlake and Mervyn Narrier were recognised for Queens Park.

Kelmscott formed its MFL team just two years ago in a bid to keep alive the 120-year old club.

“The ambition of facilitating grassroots and community football has been greatly showcased over the two years,” the club posted on its Facebook page.

In division two it was another close first quarter between Brighton and Beechboro with just one goal in it but the Seahawks soon pulled away to establish a three-goal lead in the second and third terms.

Goal kickers for Brighton were Michael Warrell with five, Jordan Pearcey with three and Justin Melidonis with two, while Brendan Thorne kicked four for Beechboro.

Brighton’s Taran Miles was awarded the Dave Kay Medal, with Jeff Alone and Warrell included in the team’s best, and for Beechboro the recognition went to Ken Ryan, Dion Goodall and Shane Phillips.