Afterpay offers Google and Apple pay in US market 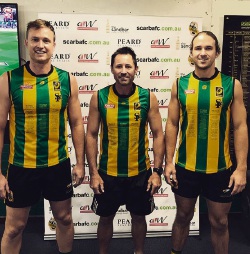 SCARBOROUGH Amateur Football Club will name its team of the first 50 years to mark the club’s half century.

The Millington Reserve, Karrinyup-based club will host its 50th Anniversary Gala at Rendezvous, Scarborough on Saturday, August 3 with guest speakers, an auction and live music and will name the team of the first 50 years.

Club patron Tim McCallum joined Scarborough in 1982 and played in the maiden colts premiership team in 1983, but his playing career was cut short because of a knee injury.

That’s when the life member of 28 years got involved in administration roles at the club and was president during three of the club’s A-grade premierships.

“That was our first A-grade premiership and we did it undefeated.”

Coached by Jim McGann, the inaugural side played in the grand final against Victoria Park at Bassendean Oval and despite a gallant fight, were defeated.

The club, which was based at Abbett Park, Scarborough until the mid 1970s, won its first premiership a year later.

McCallum said the club had gone through various stages over the past 50 years with a lack of juniors climbing the ranks limiting their ability to field multiple senior teams some seasons.

However, he said one thing never changed – the community atmosphere.

Scarborough recently hosted a past players day attracting about 300 people from players who wore the club’s colours in the 1970s to modern day players.

The 2018 A-grade premiers have three senior and one colts team this season with the top team sitting two games clear on top of the ladder.

Tickets for the 50th Anniversary Gala can be purchased on match days or by emailing [email protected].

How Aussies are drinking, smoking and using drugs

Queen Elizabeth video called with members of the Armed Force

CO2 levels haven't been this high for almost 15 million years

Common Ground Perth: new housing complex to be built in East Perth in fight against homelessness