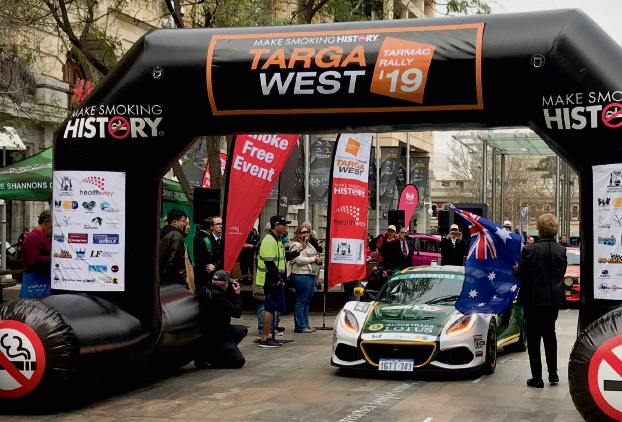 THE heart of Perth was transformed into a car lover’s dream when 50 rally cars, drivers, co-drivers and crew were flagged off on Thursday for the start of four days of racing in the Targa West rally.

This is just Major’s second motorsport event this year and he was champing at the bit to get going.

Hot on his heels was Peter Rullo and co-driver Jimmy Marquet, last year’s Targa West winners who had leased Major’s car that won them the title.

This year Rullo has a brand new beast, a 2019 Autostrada Lotus Exige Sport 410. Rullo/Marquet won Stage 3 by two seconds to put themselves in equal first place at the end of the first day.

“This car is a rocket. It’s only the third time I’ve driven it and it’s comforting to know that we’re at the pointy end,” Rullo said.

Major/Screaigh won the fourth stage by 1 second and Rullo/Marquet won stage 5, a 3.75-kilometre-long stage in Muchea, by three seconds.

Stage 6 in Muchea was cancelled due to timings running late, so competitors headed straight to Ellenbrook for the event’s first evening street circuit around Ellenbrook Central shopping precinct.

Major/Screaigh won both stages by just 1 second to finish Day 1 on top of the leaderboard 3 seconds ahead of Rullo/Marquet.

“The day has been fun and yep we did a bit of lawn mowing in Whiteman Park,” Major said, referring to a small excursion off the stage and into the grass.

“Luckily didn’t cost us much time or damage the car. The Ellenbrook stage was great fun and it was great to see lots of people turn out to watch.”

In the Competition Classic (pre-1986), the pace was set early by Simon Gunson with new co-driver Jurgen Lunsmann in their GTI Process Controls 1971 Ford Capri Perana, winning four of the six stages on Thursday to finish 41 seconds ahead of Paul Pernechele and co-driver Ben Trager in their Tony’s Auto Wreckers 1971 Ford Falcon XY.

The stage 5 winner was Mark Dobson and co-driver Nigel Jones, who is the only competitor to have competed in every edition of Targa West in its 15-year history.

Their Runabout Metals Scape Metal Recyclers 1975 Triumph TR7 suffered a steering issue soon after and they were forced to retire for the rest of the day, but hoped to be back on the start line on Friday.

The limited speed non-roll caged category, Targa 130, was tightly contested at the end of Thursday with just 1 second between first and second and 11 seconds between the top three.

Steve James and Nicholas Bentley in their 2009 Subaru WRX claimed three stage wins and another equal first to finish the day on top of the leaderboard by the narrowest of margins, ahead of husband and wife Jeffery and Catherine Foster in their 2016 Porsche Cayman 981 GTS.

James said that there was a clear difference driving under darkness in Ellenbrook.

“It’s very interesting driving at night; we nearly hit a water barrier on the first corner. It’s amazing to hear the crowds cheering as we went past – it’s like being on a race track,” James said.

The podium finish will be at Langley Park on Sunday, along with the Celebration of Motorsport and Shannons Classics on the Park featuring over 600 cars, bikes and boats on display.

Trying Dumb LIFE HACKS to see if they actually work 2