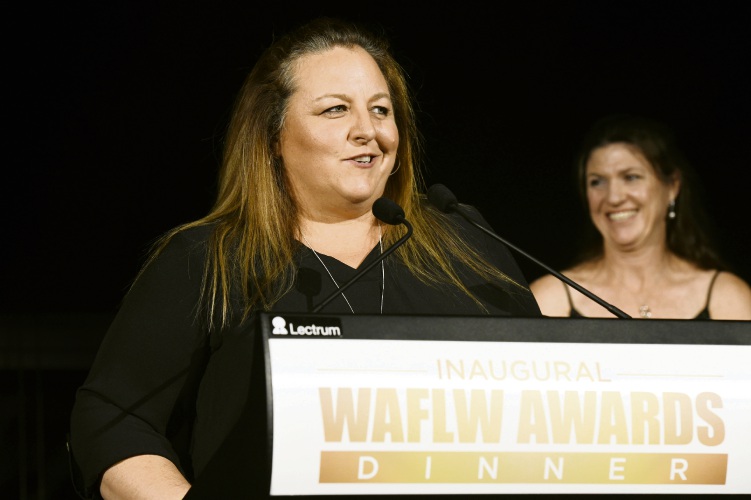 SWAN Districts women’s football manager Jo Taylor has been recognised for her 11 years of volunteering.

Ms Taylor took out the volunteer of the year award at the WAFLW Dhara Kerr fairest and best awards dinner on September 9.

She has helped grow women’s football at the Bassendean-based club, which has won several premierships including a triple wins in the league, reserves and youth girls in 2017.

She said after the initial shock and embarrassment of accepting the award, she felt very thankful and humbled.

“I volunteer at Swan Districts with the women’s program because I genuinely love and enjoy it and I also believe that we are doing some pretty great things,” she said.

“We have been growing our program for many years and have been at the forefront of promoting women’s footy, so to be able to be there to see the efforts come to fruition is just exciting.

“Swans are a great club when it comes to looking to expand into new areas and the club was about 10 years ahead of everyone else in embracing female football so to be a part of the inaugural WAFLW season is reward for a lot of hard work.”

Some of her highlights during the past 11 years include the 2010 season where Swans were grand finalists, the club’s first premiership in 2013, achieving history by claiming three premierships in 2017 and seeing former and current players become AFLW players.

She said the evolution of female football started with people becoming more aware of the sport.

“The natural flow on from there once the interest is there is then we get financial investment, allowing us to strengthen our pathways which ultimately leads to a better spectacle with continually improving skill levels and game play,” she said.

“So for me, the biggest and most exciting part of this evolution is that we now have a complete pathway, both at the beginning of the journey right through to the elite level.

“The quality of football that we see is going to go from strength to strength.

“For young girls to be able to turn on the TV and see female athletes, coaches and commentators shows that they can aspire to be whatever they want with no barriers.”

She said she would continue volunteering for as long as she could.

“This award is amazing but it takes more than one volunteer to make anything happen so a big thanks to everyone that gives up their time to help and support us here at Swans and to every one out there that volunteers in any capacity,” she said.

“If you are thinking about volunteering at a local club; there is nothing more rewarding than volunteering in any capacity.”

With the inaugural WAFLW grand final coming up on Saturday, she said she could not wait to sit back and enjoy watching Swans players do what they love in “the biggest game to date in WA”.