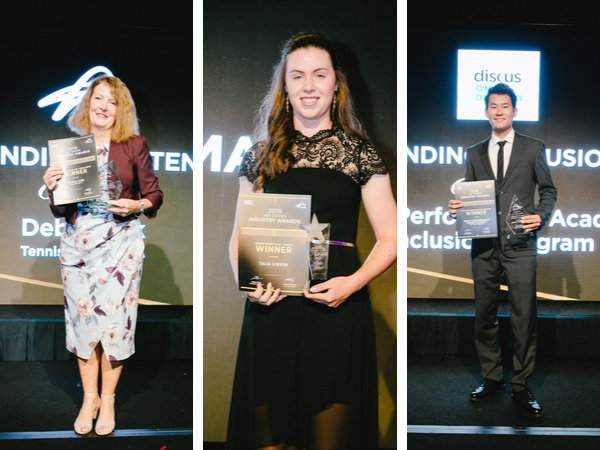 MELVILLE tennis stars have shone at a recent awards night.

The 2019 WA Tennis Industry Awards Night was held last FridayOct11 at Optus Stadium in front of a crowd of almost 300 guests.

Bullcreek Tennis Club won the Most Outstanding Inclusion Program for Perth Performance Tennis to round out the local awards.

Gibson’s long-time coach Tate Roberts, from the Brixton Tennis Centre, was acknowledged for his coaching prowess and given the Coaching Excellence Development Award.

Gibson is the number one ranked Australian female player for the 2004 birth year, in addition to moving inside the top 100 junior players in the world.

Marking 20 years of service to Tennis Seniors WA, Kirk was recognised at the awards for her unwavering dedication and commitment to raising the profile of tennis to those 35 and over.

Perth Performance Tennis Academy successfully brings tennis to people with special needs, including those with Down syndrome, autism and cerebral palsy, through the delivery of multiple weekly classes.

Having being involved in coaching for some 60 years, Smith’s influence on the WA tennis community has been far reaching.

Beginning her coaching days at the Arthur Marshall’s School of Tennis, Smith has coached all levels of athletes including school students, juniors, mid-week ladies, State League teams, PSA school teams and beginner adults across both the metropolitan and regional areas of WA