Is Eagle Nic Nat done for the AFL season? 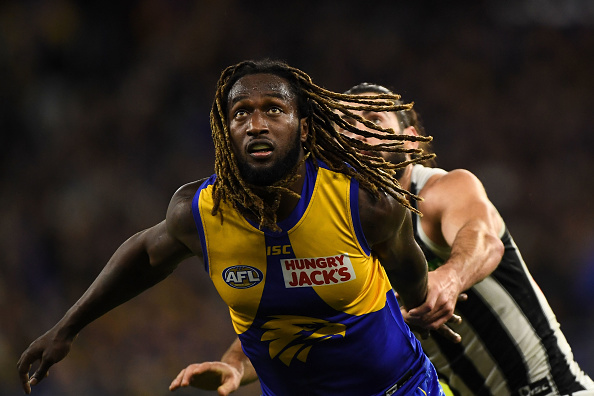 MYSTERY surrounds the fitness of Nic Naitanui, with talk the star West Coast ruckman might struggle to play again this AFL season.

Naitanui needed his ankle re-strapped early in Friday night’s one-point AFL loss to Collingwood, and looked sorer and sorer as the night wore on.

After the game, Eagles coach Adam Simpson left the door ajar for Naitanui to be rested at some point in the coming weeks due to an unspecified soreness.

But there are also rumours that Naitanui may have suffered a serious injury against the Magpies.

It would be a bitter blow for both West Coast and Naitanui were he to be ruled out for a significant period.

Eagles midfielder Dom Sheed was unsure about Naitanui’s injury status, or whether the 29-year-old would be fit to front up against the Demons in Alice Springs on Sunday.

“I think he’s a bit sore, but I’m not sure exactly what it is,” Sheed said on Monday.

“You’re asking the wrong person. I haven’t seen him since the game. I didn’t ask him what he actually did. You’ll find out in the coming days I’m sure.”

If Naitanui was ruled out, it would leave Tom Hickey to shoulder the ruck load against All-Australian Max Gawn.

Gawn tallied 56 hitouts, seven clearances and 15 disposals against Hickey and Nathan Vardy in round nine.

The Eagles ruck duo combined for just 18 hitouts in that game, which West Coast won by 16 points courtesy of their star power in other parts of the ground.

Sheed backed Hickey to perform well against Gawn if given the big task again.

“I have faith Hick can do the job if Nic doesn’t play,” Sheed said.

“I’m sure it’s something he’d be looking forward to.”

West Coast will be without Jamie Cripps for several weeks after the goalsneak injured his groin against the Magpies.

But Jack Petruccelle has put his hand up to replace him after booting five goals in the WAFL.