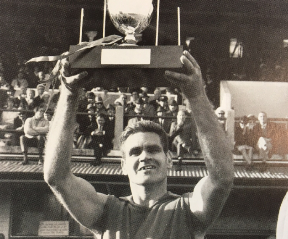 FOOTBALL legend Graham ‘Polly’ Farmer was today described as an innovator and deep thinker about the game as Joondalup WAFL club West Perth prepared to return to the ground from which he led them to two premierships.

Farmer died aged 84 today at Fiona Stanley Hospital ahead of West Perth’s clash with premiers Subiaco at Leederville Oval this Saturday and just weeks after the Falcons won the annual Polly Farmer Cup against his other WAFL club East Perth.

Premiership teammate and fellow Australian Football Hall of Fame inductee Mel Whinnen said it had been somewhat destabilising when Farmer came to West Perth as captain-coach on his return from Geelong in 1968.

“He came with a lot of different methods and ideas,” Whinnen said.

“But once we got used to those training methods and the way he thought about football, we became a strong team for the four years he stayed with us.”

“He was a very deep thinker. I haven’t struck a bloke who thought as much about football and getting people to play good footy as Polly did.”

Though he was toward the end of his career when he came to West Perth, Whinnen said Farmer’s rucking ability was still “impeccable”.

“He could still get off the ground, get hold of the ball and fire out those handballs to Stephen Smeath and Alan Watling,” Whinnen said.

He said it was “extremely sad to lose a bloke like that”.

West Perth president Neale Fong said the club wanted to pass on its deepest sympathies to the Farmer family.

“He was a legend of Australian football and we are very pleased he came to West Perth in 1968,” he said. “Instead of returning to our great rival East Perth, he chose us and we ended up winning two premierships in 1969 and 1971,” he said.

“We are very grateful he was part of our club and history.

“It was a great era for us, cementing ourselves as a great club in WA.”

Electorates would have 'missed out' on grants without McKenzie

Cause picks up for next Australian saint