Truckie, 39, charged with sex assault of teen he 'groomed after meeting online' 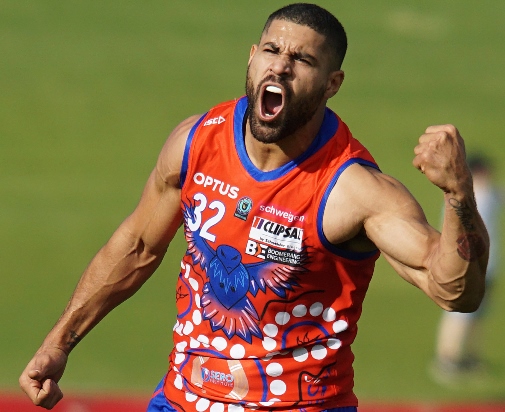 THE two WAFL clubs Graham ‘Polly’ Farmer led to five premierships will honour him with a minute’s silence before their games this round.

East Perth will also wear black armbands and their Naidoc jumpers in a nod to Farmer’s Noongar heritage for the clash with the West Coast Eagles at Leederville Oval on Friday night.

West Perth, who Farmer captain-coached to two flags after playing in Geelong’s 1963 premiership, will wear their indigenous jumpers and take part in a minute’s silence ahead of the match against ladder leaders Subiaco at Leederville on Saturday.

WAFL Council of Presidents Chairman Ric Gloede said a statue of Farmer would be a magnificent way to honour a WA football legend.

“Graham Farmer’s contribution to East Perth, West Perth and the West Australian Football League, along with the overall impact he had on redefining the way the game has been played ever since, will leave a lasting legacy never to be forgotten,” he said.

“He is one of the most important figures to ever grace a football field in Western Australia and the WAFL Council of Presidents strongly believes that Graham ‘Polly’ Farmer should be enshrined with a statue outside WA’s new home of football at Optus Stadium.

“A statue of Polly Farmer would be a magnificent tribute to his lasting legacy and a terrific way to recognise a key figure in the WAFL’s history at Optus Stadium.

“The WAFL Council of Presidents is committed to exploring opportunities to instate a Polly Farmer statue with the support of the WA Football Commission, and other key stakeholders including the AFL, State Government and Optus Stadium.”

“He is without doubt most deserving of this honour and we look forward to working with the WAFL Presidents, AFL, State Government and Optus Stadium to make it a reality.”

Electorates would have 'missed out' on grants without McKenzie

Aussies on coronavirus-hit cruise ship to be flown home