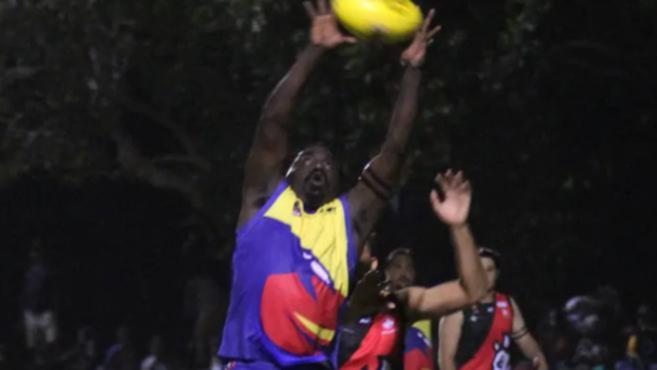 The livewire forward only lasted two games and one season in the AFL, back in 2010, but he left a lasting impression in the hearts of Richmond supporters.

The man known as ‘The Barunga Bullet’ has played in a few leagues since his time at the top flight came to an abrupt end, including country Victoria and the Northern Territory.

But this particular cameo for Waringarri Crows in the East Kimberley league during the 2018 season was one to remember.

Watch the highlights in the video player above

It was a no-brainer for the Bush and ‘Burbs best 21 country footy cameos of the 21st century list, alongside the likes of Kepler Bradley, Peter Matera and Winston Abraham.

Making a one-off appearance for the Crows, the the man who once got in trouble for eating a hamburger before a VFL match lit up the Kununurra stage under Friday night lights.

In his first 10 minutes he’d already bagged two goals, and by the time the siren for full time he had four to his name in a Crows victory.

Roberts easily could have had a fifth in the last quarter after hanging at the back of a pack for a mark in the goal square but gave the hands to a streaming Chris Griffiths, whose father sadly died earlier in the day.

Following the game Roberts said he hadn’t played any football for a couple of months and this would be a one off appearance for the Crows.

He said he decided to play because he was in the area and some of his mates were involved in the club.

THIS is how Sheffield’s housing market is looking today