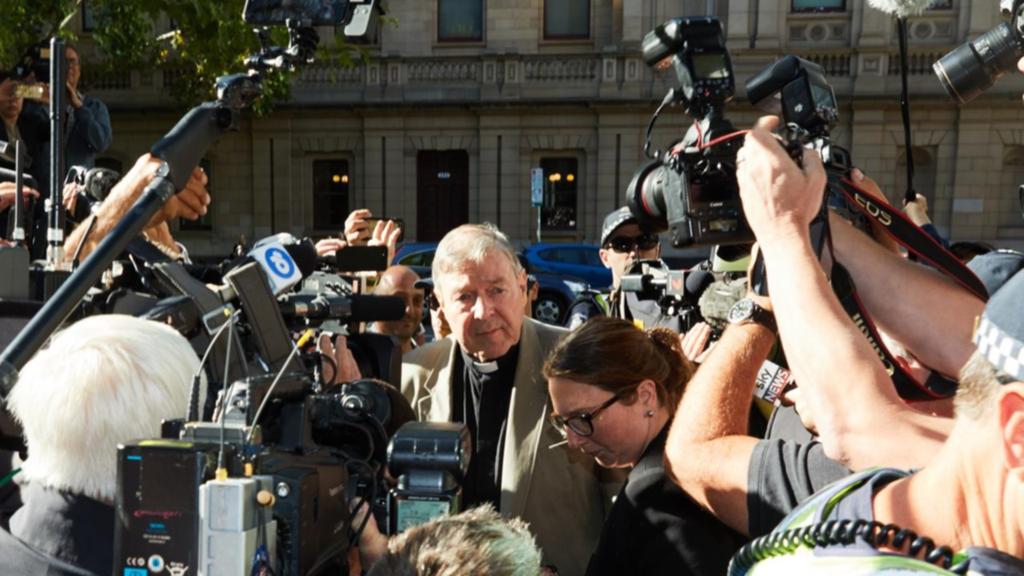 It was a room forbidden to all but a few - certainly off limits to the likes of the two 13-year-olds who found their way inside after a Sunday Mass.

By some accounts that area is a hive of activity on Sunday mornings, but for six minutes one day in December 1996 the two boys found themselves in there alone with now-Cardinal George Pell.

"He planted himself in the doorway and said something like 'what are you doing here' or 'you're in trouble'," one of the boys said of the then-archbishop.

Dressed in his ornamental robes Pell exposed himself and molested one of the boys. He then pleasured himself and raped the other.

Those events are a "product of fantasy" and "absolute rubbish", Pell told police when confronted with the allegations in Rome four years ago.

His trial barrister Robert Richter QC speculated that the boy might have grown to believe his own fantasy.

But a jury of 12 unanimously disagreed and Pell was convicted on five charges of child sexual abuse. He's the most senior person in the Catholic church to be convicted for abusing children.

As a scholarship student at the prestigious St Kevin's College, the boy was fearful of jeopardising his schooling and was in shock. A month after he was assaulted, he was shoved against a wall and fondled again by Pell.

He came forward in 2014 after the death of his friend.

Pell has spent a tick over 400 days behind bars since being convicted by a jury late in 2018.

The trial was held in secret. He remained on bail for months after his conviction, awaiting a second trial on separate charges dating back to allegation in Ballarat in the 1970s.

But when those charges were dropped, his earlier status as the most senior Catholic in the world convicted of sexually abusing children, was exposed.

Late last February, Pell was taken into custody and weeks later he was sentenced to serve six years in prison for what he'd done.

Even before he was sentenced, Pell filed an appeal against his conviction.

Appeals specialist Bret Walker SC has led the way to the Court of Appeal and now the High Court, taking over from Mr Richter.

Mr Richter believes Pell is one of a handful who truly are innocent.

But his appeal was rejected by two thirds of the top judges who heard his case.

Mr Walker had argued while the jury had found Pell guilty beyond reasonable doubt, there wasn't enough evidence presented by prosecutor Mark Gibson SC for them to reach that verdict.

There was "strong, credible and undispelled" alibi evidence, including from Monsignor Charles Portelli and sacristan Max Potter that it was Pell's practice to greet parishioners on the front steps of the cathedral immediately after Mass.

"If he was at the western door, then the law of physics tells us this is literally, logically impossible for the offending to have occurred according to the complainant's account, and there is no other account," Mr Walker said.

It took months before the decision was made. Chief Justice Anne Ferguson and President Chris Maxwell refused Pell's appeal.

The trio of judges watched the complainant's evidence, the testimony of other witnesses, tried on the ornamental robes and visited the cathedral.

There was enough evidence to find Pell guilty, they said.

Justice Mark Weinberg, the criminal specialist of the three appeal judges, disagreed and said he would acquit. But he was outnumbered.

Pell's last chance for freedom lies with the High Court. Its decision, reached by the full-court of seven judges, will be handed down on Tuesday.

A major hurdle for that appeal is being granted special leave to do so - the judges want to be satisfied there is a legal basis for them to even consider the case.

It's a hurdle that hasn't been crossed in Pell's case. In another of a series of unusual moves in this case, the court determined they would hear the appeal before making that decision.

Mr Walker used the same line of argument in the High Court as he did in the Court of Appeal, but this time arguing the appeal majority made an error by not properly considering all the exculpatory evidence against Pell.

But Victoria's top prosecutor, Kerri Judd QC, said the appeal court had done what the jury had done, and considered all the evidence in context.

Monsignor Portelli and Mr Potter had given evidence that it was Pell's practice to be on the cathedral steps, practices aren't always followed, but several choirboys said that didn't always happen, she said.

There's also the fact he was able to so accurately describe the priest's sacristy and that he'd even identified that room.

Ordinarily Pell would have changed in the archbishop's sacristy, but for a few months in the mid-1990s that room was being renovated.

Tuesday's ruling will be announced amid coronavirus restrictions, with the nation's superior court handing down its decision in Brisbane, likely by only one of the seven judges.

Queensland borders are currently locked down. The state is home to Chief Justice Susan Kiefel, but also to Justices James Edelman and Patrick Keane.

Social distancing rules mean only two or three people will even be allowed in the courtroom. Live streaming? No chance.

So the High Court will become possibly the first court in Australia to break news of global interest themselves. And on Twitter no less.

It means 78-year-old Pell, whose interest in the outcome is second to none, may be among the last to know.

With prison visits banned and no way to watch, it's not clear how he might even find out.

Elderly man stabbed in the back by runaway attacker

PM pledges $131.4b towards Australia's public hospitals in wake of COVID-19

Try Not To Laugh Challenge #47 - At Home Edition!