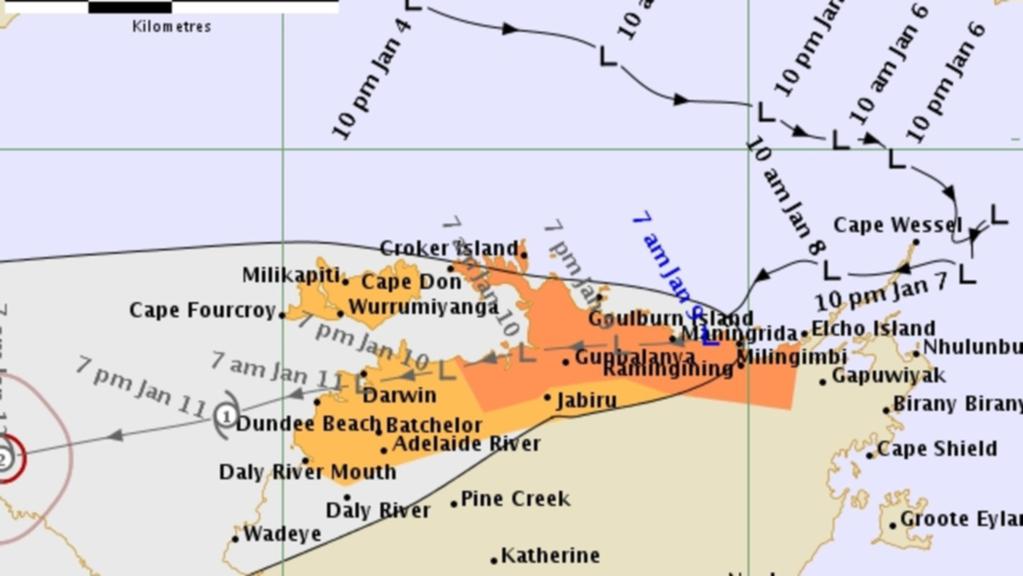 11AM UPDATE: The Bureau of Meteorology’s latest update has forecast the low to continue moving across land before heading out to sea, with a watch zone narrowed to Point Stuart and the Daly River mouth

The low is forecast to cross over Darwin as a low before moving out into the Timor Sea where it will strengthen into a category 2 system.

The low is predicted to cross the Darwin area late Friday or early Saturday.

The system is expected to bring wet and windy conditions, despite it not reaching cyclone intensity.

The Bureau of Meteorology has cancelled the watch and warning zones for Elcho Island to Goulburn Island, and Cape Don to Point Stuart, including Maningrida, Milingimbi, Goulburn Island and Croker Island.

Earlier: The tropical low near Milingimbi has moved over land earlier than expected meaning it is now unlikely to form into a cyclone until it passes Darwin, the Bureau of Meteorology has advised in its latest update.

However, the BOM advises there is still a possibility that it could form into a cyclone earlier if it crosses over water in the Van Diemen Gulf east of Darwin, early tomorrow morning.

A warning zone is current for Elcho Island to Goulburn Island and Cape Don to Point Stuart.

A watch zone is current for Cape Fourcroy to Cape Don and Point Stuart to Daly River mouth, which includes Darwin.

The next update is due at 11am on Thursday.

UP TO 500mm of rain could hit parts of Top End

At 8am Thursday, the BOM said the low had started moving southwest and was expected to move over land this morning, hindering its development into a cyclone.

It said the low will continue to move further inland initially, though it may turn towards the west and move along the Top End’s north coast later today.

Following this track, the low is expected to move over Darwin between Friday night and Saturday morning without developing into a cyclone.

However, the BOM said there was a possibility the low could move over water in the Van Diemen Gulf, in which case it could develop into a cyclone early tomorrow.

There could be winds and gusts of up to 110km/h between Elcho Island and Goulburn Island, including Maningrida and Milingimbi during today.

The BOM said these winds may extend further west to Cape Don and Point Stuart tonight.

On Thursday at 3.30am the tropical low had winds of 55km/h at its centre and wind gusts up to 85km/h.

It was 40km north northwest of Milingimbi and 155km east of Goulburn Island moving at 6km/h.

Gales may develop over the Tiwi Islands, between Point Stuart and Dundee Beach, including Darwin later on Friday or Saturday, if the low moves into the Van Diemen Gulf and develops into a cyclone.

LIMITED TIME offer: NT News subscription – 50 per cent off* for the first 12 weeks

There also could be heavy rainfall and flooding on the north coast, including the Coburg Peninsula today.

Abnormally high tides are likely today and on Friday morning, with damaging winds and dangerous flooding during high tide predicted.

Socialist councillor: Casual workers who have to isolate need job and shift guarantees

Coleen Garcia Plans To Have A Medication-Free Childbirth