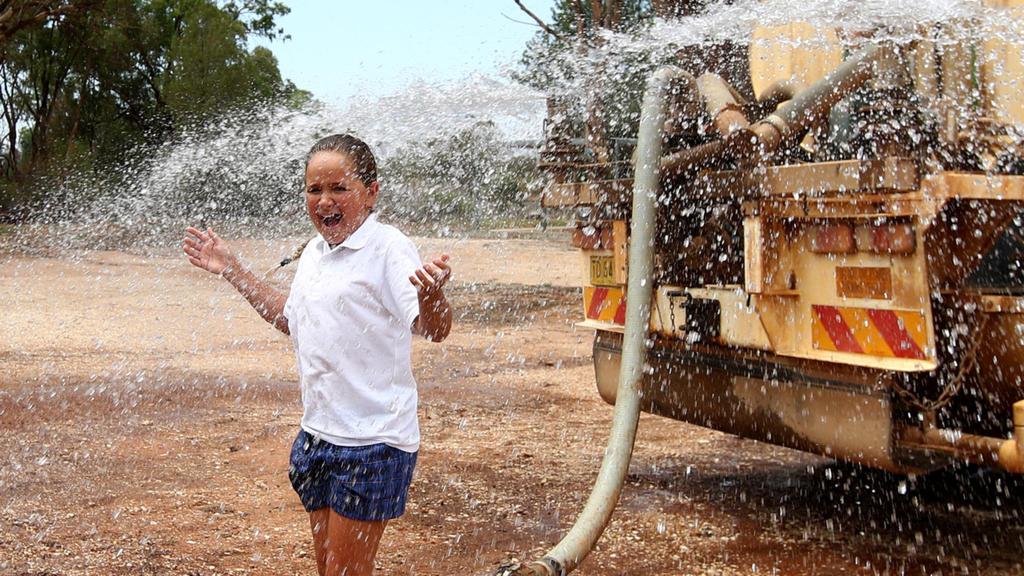 The barren greens of the Tottenham Bowling Club have received a boost after thousands of litres of water arrived in the drought-stricken town thanks to generous donations.

Hundreds of NSW farmers and community groups spending thousands of dollars carting water for drinking and domestic use have received a free fill up in recent months thanks to donations from city residents.

The “Litres for Land” initiative was launched by ClubsNSW in October, and has already resulted in 920 water deliveries across the state, including a 24,000 litre drop to the Tottenham Bowls Club this week.

Secretary-manager Kelly Anderson said the bowls club has become a social hub for Tottenham’s residents – of which 95 per cent are farmers – during the drought.

The area has received below average or no rainfall every month since 2017.

“We do mental health information sessions for farmers, the local Lions Club meets here, we do a social games night … we’re not doing it at the moment because our bowling greens are in such bad condition, but those sort of things are so essential, especially when things are so bad,” she said.

“It gives farmers a chance to stop, to not have to walk out the door and see how bad it is, and instead come to town, have a couple of beers and play some bowls.

“They might not openly talk about how bad things are for them, but they talk about what they’re doing and it gives them a mental release.”

Ms Anderson said the delivery of water would help her stretch the club’s limited finances further and keep the doors open.

“If this club is to close, the town will suffer greatly, and unfortunately it’s a possibility … we’ve lost our groundskeeper, cleaner and cook in this drought and without this water our greens would not have survived.”

Her three daughters – used to being allowed just a couple of minutes to shower all together – were shocked when the water started pouring out of the truck at the Club.

“The first thing they said was ‘don’t waste any of it’ because all the kids in town are so aware of how dire the situation is,” Ms Anderson said.

Almost $1 million has been raised through donations to ClubsNSW so far, which has been used to purchase water from locals with carting truck businesses and then delivered to households and community facilities in need.

Veterans charity Team Rubicon Australia has taken on the mammoth organisational task of co-ordinating water deliveries through local carters to some of the hardest hit areas of central west and northern NSW.

Local farmer and truck owner Matt Ferrari has done almost 20 Litres for Land deliveries to homes and farms, and said the work has helped him maintain his own business during the drought.

“I’ve delivered all around the central west to a range of different places so it’s kept us going when it’s been a bit quiet, and helped everyone else out who needs water as well,” he said.

“Everyone who gets the water is just really thankful.”

ClubsNSW chief Anthony Ball said the idea of fundraising to deliver water to families and farmers in need came after one club started a smaller local initiative.

“We have more than 700 of our clubs in areas impacted by drought, so it’s very much front of mind for our industry,” he said.

“When one of our member clubs, Club North Haven, told us about the positive impact their water initiative was having on recipients in their region, we decided to expand it right across the state.”

Mr Ball said the partnership with Team Rubicon Australia, who have been on the ground co-ordinating deliveries, ensure the water was getting to “people who need it the most”.

SURPRISING MY SISTER AND HER CRUSH WITH DREAM PROM!