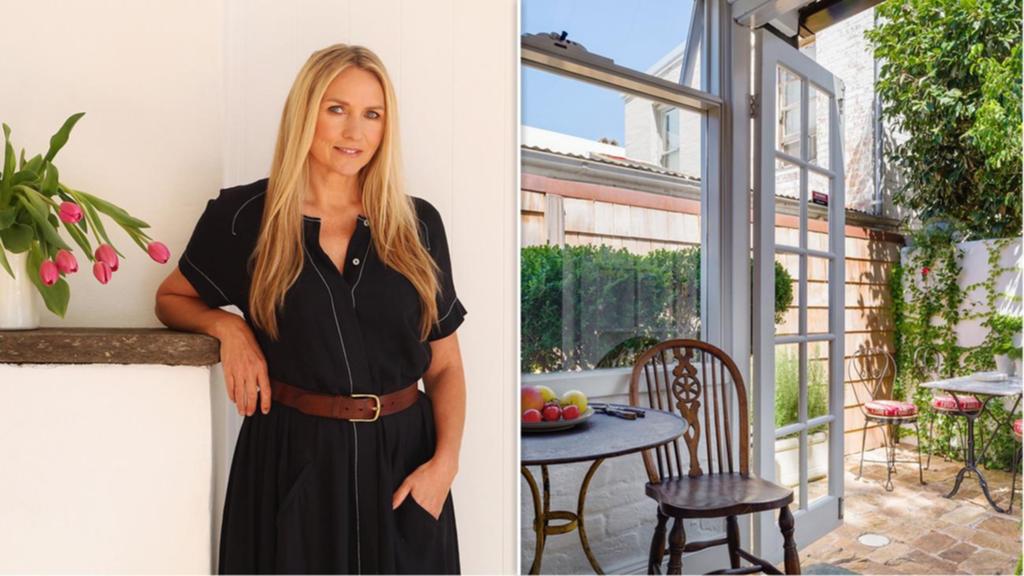 It’s the Mary Place investment terrace bought from her brother, creative director Seamus Dinnigan, for $1,925,000 in 2017.

The popular rental is a rare 1850s freestanding cottage spanning just 70sqm of internal space. The terrace with two bedrooms and one bathroom has been listed by Ivan Bresic at BresicWhitney.

Seamus Dinnigan had bought the home for $1.08 million in 2015 from gallery owner Evan Hughes and his lawyer wife, Kate.

Dinnigan quit the fashion world after 24 years in 2014, and turned to real estate with her entrepreneurial husband Bradley Cocks. They’re spending more and more time in Italy.

Initially the couple was renovating a 100-year-old farmhouse in Puglia, and are keen to take on other projects.

They retain a Darling Point bolthole, along with retreats in the Southern Highlands and at Milton on the NSW south coast.

Further south their stylish Rosedale Airbnb cottage was burnt down during the summer bushfires. It was incinerated on New Year’s Eve along with most of the houses in the clifftop precinct.

A $5.05 million Newtown record has allowed artist Tom Arthur and wife Sandra to downsize to Balmain.

Their home, the former Mas­onic Hall on Station St, was bought by WiseTech Global exec Brett Shearer and wife Bronwyn, who were upsizing from their $2.84 million Stanmore home.

The Arthurs have spent $2.8 million on a newly constructed Balmain terrace, one of just six in the Parkes Residence development, a project based around the conversion of a historic mansion on the fringe of Punch Park. The two level smart home spanning 210sqm has three bedrooms all with ensuites.

It’s in the same development Hollywood actor Rebel Wilson paid $1.88 million for an off the plan investment in 2015, getting a two-bedroom, two-level apartment spanning 150sqm.

The Arthurs spent more than three decades at the ­former Masonic Hall.

The criminal lawyer Michael Croke, who is facing charges of perverting the course of justice, has listed his Potts Point office terrace for sale.

Croke is seeking $2.3 million for the Kellett Street offering through Tristan Bassey and Nick Chalipilias at Ray White.

The two-level Victorian terrace has 170sqm of space, with plentiful shelving full of Croke case files.

Croke recently won a delay for his trial until March, the third time in three years there has been a postponement. He has pleaded not guilty to perverting the court of justice.

The matter concerns a $700,000 bag of cash seized from a person staying in Sydney’s Hilton Hotel in 2011. Croke allegedly assisted a criminal group in their attempts to convince the police the money was from a legitimate source.

Croke had previously not been able to provide the necessary funds for his defence which saw postponements in 2018 and 2019.

The delay to the anticipated six-week trial this time was as Croke’s barrister John Korn had been double-booked with a rape case client.

Yet another Mosman trophy home has been sold, as the mopping up of old stock continues.

Siobhan Downe has found a buyer having listed in 2018 with initial $22.5 million to $25 million hopes.

It was about the time she’d spent $9.9 million on a Millers Point terrace bought from former Coca-Cola boss Warwick White.

The dual-block golden triangle Mosman holding had been purchased from the former Vivendi Water boss Kevin Doyle in 2001 for $6.25 million.

Next door cost $3.26 million for a floodlit tennis court with garaging underneath.

Raine and Horne’s Brendan Warner and Richardson and Wrench’s Stephen Patrick had revised the pricing of the Michael Robilliard designed home with Sarah Davidson interiors.

The Hopetoun Ave address was the third Mosman home over two decades for Downe and her then Macquarie banker husband, Andrew.

Formal settlements will show whether the new Mosman non-waterfront record holder was another hush-hush sale on Ruby St.