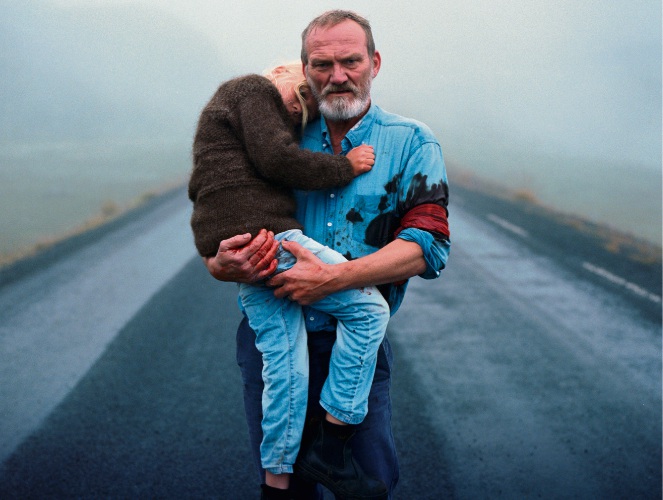 RETIRED police chief Ingimundur (Ingvar E. Sigurdsson) is still grieving the death of his wife and is resistant to the help offered by the therapist he is forced to see.

He takes solace in renovating his remotely located homestead and looking after his energetic granddaughter Salka (da Mekkn Hlynsdttir), with whom he shares a close connection.

Ingimundur’s memories of his wife become marred when he begins to suspect her of infidelity and his obsession with discovering the truth leads him down a dark path of unpredictable behaviour and violence, to the detriment of not just those around him but also himself.

The star of A White White Day is the Icelandic countryside; the sparse rolling hills and long winding roads shrouded in mist serve to enhance the misery felt by Ingimundur, as well as the harshness of a life where his granddaughter is encouraged to kill a fish by hitting it repeatedly against a table.

A still shot at the beginning of the film showing the homestead in different seasons emphasises this focus on nature and is just one of many sequences that speaks to the atmosphere of the film rather than furthering the story.

While long sequences like a rock bouncing down a hill to land in a river are clearly meant to have a deeper meaning, they mainly go to show how pedestrian the actual plot is.

Infidelity features as a turning point in many films and while Ingimundur’s particularly violent response might be a new one, it is more confronting than interesting.

The more engaging relationship is that of Ingimundur and his granddaughter and scenes that feature the two of them are by far the most watchable.

Two and a half stars

Patriots Mailbag: Do The Patriots Have Enough Tools At WR?