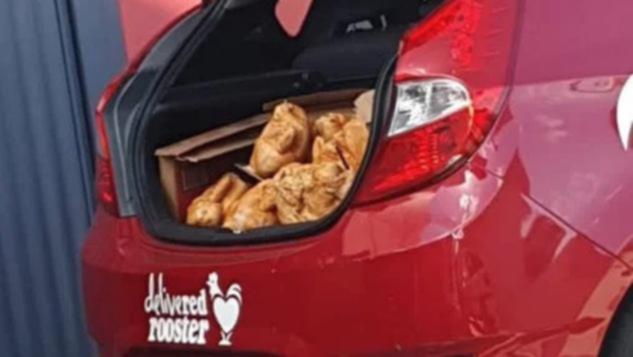 Two Red Rooster restaurants have closed after shocking photographs surfaced of chicken sitting uncovered in the boot of one of the fast food chain’s cars.

A Facebook user shared pictures of a Red Rooster car with an open boot filled with uncovered chicken, leading to the sudden closures of restaurants at Forrestfield and Waypoint this week.

Mark Copley, who took the pictures at Forrestfield, told 7NEWS the chickens were “on rotisserie skewers” and were being brought into the store on a day when temperatures exceeded 30 degrees.

“The boot was lined with cardboard but nothing else. Not wrapped, not refrigerated. The opportunity for cross-contamination is immense, plus the fact food is stored in the danger zone for temperature,” he told 7NEWS.

A sign on door of the Forrestfield restaurant says it will be closed until further notice due to “unforeseen circumstances”.

Red Rooster has confirmed the stores will be closed temporarily while investigations were carried out.

“Following concerning matters being brought to our attention through a social media post, Red Rooster has made the decision to temporarily close two restaurants: Waypoint and Forrestfield located in Western Australia,” the company told 10 Daily.

“These stores will remain closed while detailed investigations are conducted, required actions are taken and we are satisfied that the operating standards of these locations meet the high expectations of our strict brand standards.”

The fast food chain said deliveries had also been suspended.

“As a precaution, all potentially impacted product has been removed and disposed of. All surfaces, equipment and facilities have been thoroughly cleaned and sanitised. Supplier deliveries have been suspended until such time stores are approved to reopen,” the statement said.

“Red Rooster is extremely disappointed by this incident and takes such matters seriously.”

The City of Kalamunda is also investigating the incident.

Victorian learner driver off the hook over virus breach