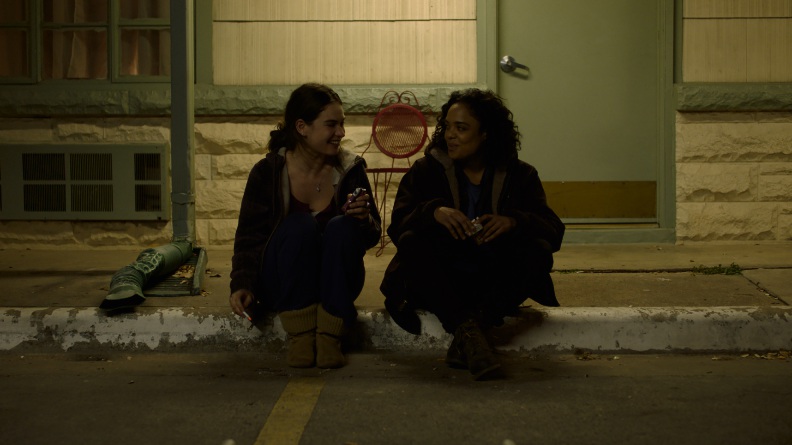 THERE is an awful lot of pain in Little Woods, North Dakota.

Some can be addressed with under-the-table drugs in this fracking town that’s seen better days. But a lot has more complex origins.

Ollie (Tessa Thompson) has lost her adoptive mother and is just trying to get through the last few days of her probation for running prescription pills over the Canadian border.

Just a handful of days. Surely it can’t be so hard for a capable young woman. Her probation officer (Lance Reddick) has great faith in her and she’s even been recommended for a job in a new town, offering a fresh start.

But her estranged sister Deb (Lily James) is suddenly back in her life and the complexities build.

Single mother Deb, living in a van with son Johnny (Charlie Ray Reid) is pregnant again, and there’s no money to have the child; abortion is the plan. That requires crossing the border, faking her ID.

The sisters have a week to settle the mortgage on the house that might offer Deb some stability. It’s just a few thousand dollars but like everything here, it’s tantalisingly close but distant.

Ollie has some choices to make. She knows how to sell drugs, can apply her skills, sass and common sense to the task. She could also destroy her prospects of getting through probation.

The set-up complete, everything proceeds as though at the end of a long, dirty but volatile fuse. It could all go bang.

Yet above all, for the people of the world director Nia DaCosta has chosen to depict here after visiting North Dakota and seeing the actual plight of its inhabitants, there really is no big bang.

Everything moves relentlessly, somewhat gruesomely, deliberately, but with no real force.

Which way is up? It’s hard to tell but these precarious lives are captivating at every turn.