By the Grace of God film review: crimes in plain sight 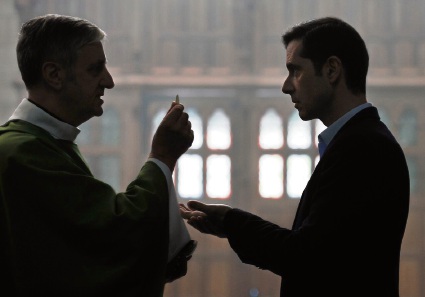 A CURIOSITY of our age is how many crimes occur in plain sight.

It might be a result of our advances in technology. With so much surveillance and the ability to corroborate, it’s impossible to ignore instances of police brutality, wage theft, government lies.

I’d put sexual abuse in the Catholic Church in the same category.

We see no CCTV footage of the abuse itself, but the relentless testimony of survivors makes it quite clear that the peculiarities of the Church’s very stance on sexual relations has scarred countless lives.

Mostly young, many indelibly changed into adulthood, if they survive at all.

The Church can cloak it however it seems fit but the narrative is depressingly similar in countless examples.

It’s that notion of plain sight that’s most intriguing about writer/director Francois Ozon’s By the Grace of God.

It has elements of the police procedural, yet the main antagonist admits his crimes almost immediately.

Of course, the reckoning for those crimes is far more complex given church hierarchy and defence tactics.

It is Alexandre (Melvil Poupaud) who finds out that Father Preynat (Bernard Verley) is still working with children, decades after Alexandre was molested at St Luc summer camp.

Based on actual recent events in the Archdiocese of Lyon, France, it starts Alexandre on a path that brings large numbers of survivors to the fore, in particular Francois (Denis Menochet) and Emmanuel (Swann Arlaud).

Their experiences of their abuse are more or less similar, their personality types chalk and French cheese. Ozon (Swimming Pool) puts away all his noirish flourishes and overt eroticism for a straightforward cinematic representation of a group of men and the women who support them in a relentless call for justice.

People, Ozon seems to suggest, are people, and institutional criminality and cover-up is just that. Plus ca change.

The vital worker JobKeeper left behind in the pandemic