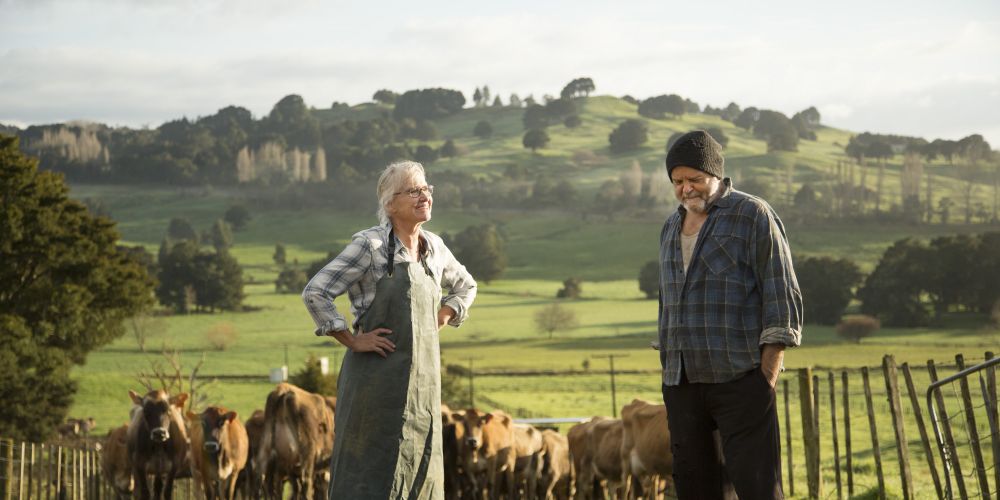 BELLBIRD is another successful entry into the genre of sweetly melancholic and gently humorous New Zealand films.

Ross (Marshall Napier) is a grumpy monosyllabic dairy farmer but he adores his musical wife Beth (Annie Whittle) who their son Bruce (Cohen Holloway) says does the talking for both of them.

Bruce is enjoying his work finding treasures in the trash at the local tip with Connie (Rachel House) – both actors are recognisable from the films of NZ’s best known director Taika Waititi.

The similarities to Waititi’s Hunt for the Wilderpeople continue when Beth dies suddenly and Ross hides his grief behind his farm work.

While Bruce is happy to help out, he is not quite cut out to be a farmer, whereas cheeky teenager Marley (Kahukura Retimana) is much more suited and willing.

The quietness of the characters is reflected in the silence of the NZ country broken only by the mooing of cows, chirping of birds and the pattering of rain.

The cinematography takes in panoramas of undulating vibrant green fields contrasting with the dark colours of the trees and paths of mud that thread their way through the landscape.

Much of the story told through physicality, facial expressions or sometimes purely through a flicker of the eyes and the sparse dialogue allows each actor to fully embrace this.

Yet when there is dialogue it is sharp, to the point and often very funny.

At its core, Bellbird is about how the strength of community can be harnessed to help men find better ways of expressing their emotions and grief.

Showing as part of the Perth Festival Lotterywest Films, February 10 to 16