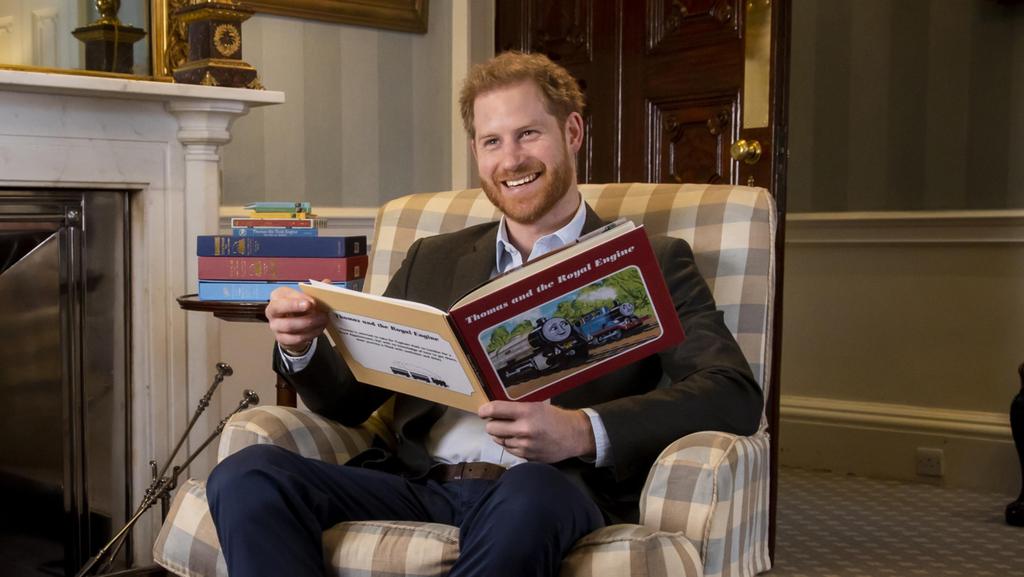 The Duke of Sussex today introduced a special episode called Thomas & Friends: The Royal Engine — an animated adventure set when Prince Charles was a child and which features both his father grandmother as key characters.

The Royal Engine episode also introduces a new character – the Duchess of Loughborough, voiced by actress Rosamund Pike (Gone Girl and Pride and Prejudice) – and sees Thomas the Tank Engine travel to London for the first time — at the wishes of a young Prince of Wales.

In his on-camera introduction filmed in January, Harry introduces the special episode while reading a book about the little engine from his armchair.

“This year, Thomas & Friends is celebrating 75 years of friendship and teamwork,” he reads.

“The story starts late one afternoon, on the Island of Sodor.”

Speaking of the 22-minutes TV special, the Duke of Sussex said Thomas the Tank Engine had been a comforting, familiar face to so many families over the past 75 years.

“I certainly have fond memories of growing up with Thomas & Friends and being transported to new places through his adventures,” he said.

“I am very proud to have been asked to take part in this special episode. I wish Thomas & Friends a very happy anniversary.”

Actress Rosamund Pike said it was an “absolute honour” to guest star in the 75th anniversary special.

“I take it as a big responsibility to play Duchess who is a lovely, warm, bubbly sort of effervescent engine that I am incredibly drawn to because she is very anxious to get things right,” Pike said.

In the episode, which will be screened in Australia on May 16 on ABC, Sir Topham Hatt is invited to London by Her Majesty The Queen to receive an award for distinguished service to the railway, and her son, a young Prince Charles, has asked that Thomas be the engine to bring him to the Mainland.

As this is Thomas’ first time visiting London, he gets lost along the tracks and finds himself in all sorts of messy predicaments, but this doesn’t stop him from eventually finding his way.

Thomas and Sir Topham Hatt work together to make up for their delay, and during the journey, Thomas encounters a very important looking new engine called Duchess.

General manager and senior vice president of Thomas & Friends owner Mattel, Chuck Scothon, said “in this milestone 75th year, we are releasing more storytelling content than ever before to engage the next generation of fans”.

“While families are spending more time at home, we are able to offer new content to enjoy together across videos, books, apps and through music and podcasts and are thrilled Harry, The Duke of Sussex is introducing this special.”

Thomas the Tank Engine was created 75 years ago, by a British clergyman, the Rev W Awdry, as a storybook for his young son.

That story grew to become an award-winning preschool entertainment franchise, enjoyed by families in more than 230 territories and over 60 languages across many touch-points including: TV, toys, books, apps, live attractions and much more.