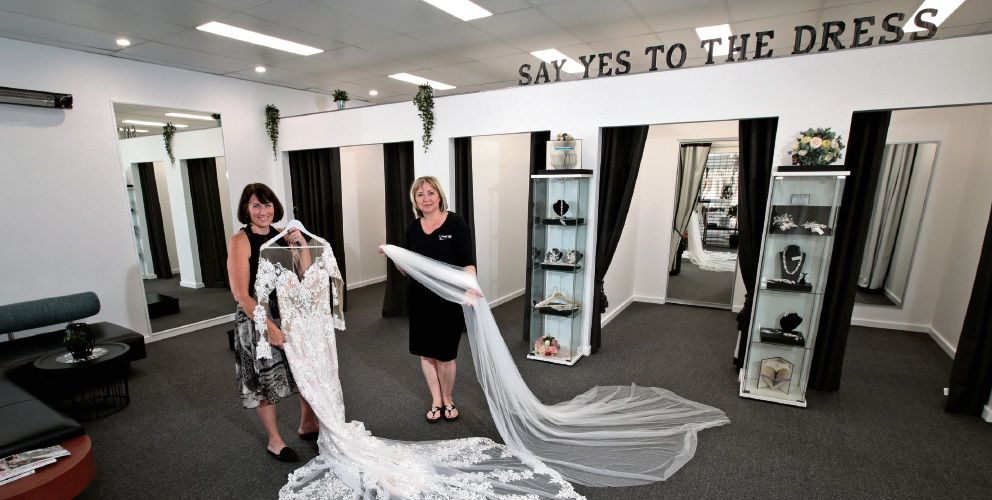 JACQUI Dunn likes to think of the re-opening of her bridal store as being like the phoenix rising from the ashes.

Early on April 18, the day before Good Friday, Mrs Dunn received a phone call that her Wangara shop English Rose Bridal had been caught up in a commercial fire.

“I just jumped in the car in my pyjamas and a denim jacket,” she said.

“I just needed to get in and get the gowns out for the girls who were getting married that Easter weekend.”

While her store was not the one up in flames, it was filled with smoke from the neighbouring fire.

“It was chokingly thick with smoke, pitch black and the noise of the water on the roof and next door was so eerie… but we got all our clients’ gowns out,” Mrs Dunn said.

“What they were like at this stage was undetermined, but smoke damaged was guaranteed.

“We then had to wait another hour or so before we could re-enter and retrieve the clients’ files so we could contact them in priority of wear date.

“We are ecstatic to say not one bride missed wearing their gown on their day.

“Koko Dry Cleaners set aside priority time to work with us, as the process to treat a smoke damaged gown is specific and takes a considerable amount of time, and seven weeks later our last gown was completed.”

“Unfortunately, none of our retail stock gowns came out of the old store,” Mrs Dunn said.

“All were taken by insurance so a complete floor stock of new gowns had to be remade, which takes months.”

Mrs Dunn said when they retuned to the Wangara store, they discovered the damage was “more extensive than first feared” and would take much longer to fix than they thought.

Being unable to trade for more than four months already, they decided to look for a new store, which they found at Joondalup Gate South in Edgewater.

“The property had been empty for four-plus years so it definitely needed some work and was quite a daunting project to undertake with a limited timeframe,” Mrs Dunn said.

“But thanks to my amazing husband and son, the three of us managed to complete the shop fit-out in 15 very long days.

“Along with the support of my friend and colleague Charmaine, we all finished at 1.30am on September 7, and opened at 9am the same day.”

Now English Rose Bridal will host an official re-launch this Sunday, November 3, to celebrate the “sheer joy at finally being up and running once again”.

“Whether you are a past or present bride or bridal party, someone new who would like to have a browse, a vendor we network with or a friend, please come by and say hi,” Mrs Dunn said.

The event will run from 2.30pm to 4.30pm with some light refreshments provided.

“We have also spoken with the crew from Wangara Fire Station, who assisted me in entering the old store and rescuing the gowns, and though they say they were just doing there job, we feel they went over and above for our clients,” Mrs Dunn said.

“So to show our appreciation and gratitude for the fire crews, we will be making a donation to their chosen charity: the Perth Children’s Hospital burns unit.”

Raffle tickets will also be on sale with proceeds going to the charity.

#AskNASA What is Hubble revealing about the universe?