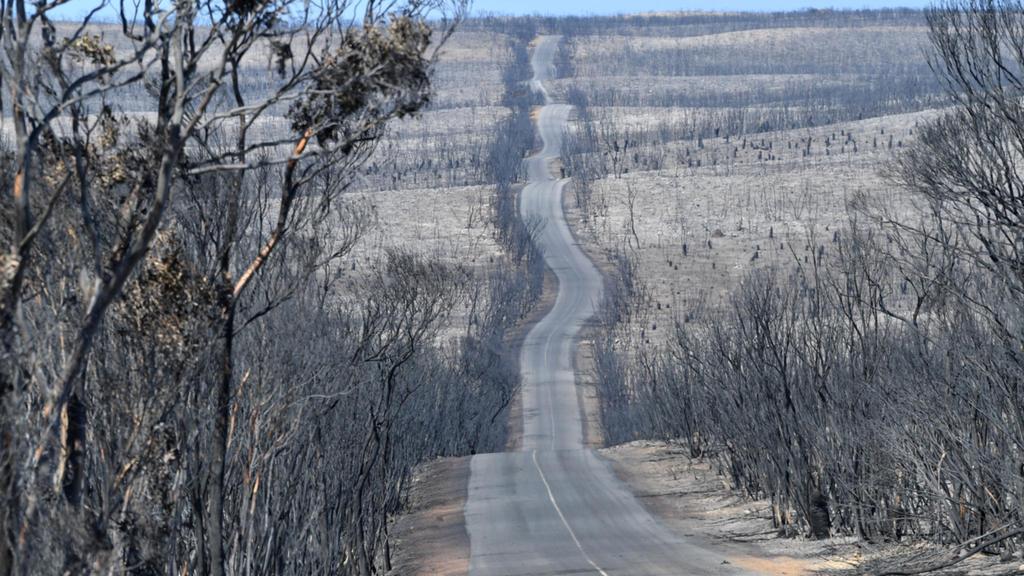 Farmers and small businesses hit by the Kangaroo Island and Cudlee Creek bushfires will get access to recovery grants in an $11 million relief package.

Prime Minister Scott Morrison will announce the grants with Premier Steven Marshall when he flies into South Australia on Wednesday.

Both Mr Morrison and Opposition Leader Anthony Albanese will be in SA in the wake of the KI blaze, which claimed two lives, destroyed 56 homes, and burnt more than 155,000ha – about a third of the island.

Small businesses directly affected by fires on KI and in the Adelaide Hills can seek grants of up to $10,000 to help them recover, while primary producers who suffered in the blaze will get up to $15,000.

“South Australia, particularly the Kangaroo Island and Adelaide Hills communities, have faced devastating losses and the bushfire threat is not over yet,” Mr Morrison said.

“But we will be there, backing the communities every step of the way as they rebuild and recover.”

Mr Marshall said SA wanted the fire-affected communities “back on their feet and flourishing as soon as possible”. “We are acting swiftly, focusing initially on the engine room of these communities – primary production and small business – and this investment will help jump-start the recovery of both Kangaroo Island and Cudlee Creek,” he said.

“Despite the tragic circumstances, the people I meet on the ground are determined to recover and rebuild, and we are working with the federal and local governments to provide the support needed.”

Natural Disaster and Emergency Management Minister David Littleproud said the money would help farmers and small businesses clean up, repair damages and replace stock. The $11 million is jointly funded by SA and Canberra.

A force of 121 ADF personnel has been deployed to KI to help with immediate relief and clean-up, including delivering a water-purification plant to restore clean water.

Mr Morrison will meet South Australians devastated by the disaster on Wednesday, as well as ADF members. Mr Albanese, who has visited SA three times in recent weeks, will visit koala rescue workers after almost half of KI’s koala population was lost in the Ravine fire.

The Advertiser understands every senior Labor MP will also fly into Adelaide on Thursday for a shadow cabinet meeting, which will discuss bushfire recovery efforts.

It’s the first senior meeting in the city in more than a year and comes after Labor MPs last year spoke out about concerns SA would become a flyover state, with just one marginal seat.

The visit by the two leaders comes a day after Governor-General David Hurley toured the island with his wife Linda as part of a national tour of fire-hit regions.

He used his visit to urge residents to seek support during their darkest days. “It’s the big message around the country for people – put your hand up if you need help,” Mr Hurley said.

He said rural communities would take years to recover and in the meantime, reiterated calls for South Australians to support islanders through holidaying in the region and helping prop up its economy.

“Get out there and put money into the community directly,” he said.

Among the small delegation meeting the Governor-General on Tuesday was Stokes Bay farmer Stephanie Wurst, whose family lost their house, sheds and many of their livestock.

“I’m doing OK but I can see that there’s many in our community that aren’t,” she said.

Meanwhile, Treasurer Josh Frydenberg has backed a national inquiry into the bushfires.

He said the Prime Minister would discuss an inquiry with premiers “because clearly there will be lessons to be learnt and there will need to be a proper inquiry to gather that information.”

The Treasurer also declared “our view on climate change is that it’s real” after Liberal backbencher Craig Kelly was accused of being a “climate denier” on a British television interview.

Bracing for a return of high-risk fire danger

Authorities have warned Kangaroo Island is not out of danger yet, as parts of the state are expected to soar above 40C on Thursday.

CFS chief Mark Jones said backburning was under way to protect communities ahead of the dangerous fire conditions.

“We are also increasing capability on the island in the event of an outbreak … and are considering sending extra firefighting resources,” he said.

“I visited the island and witnessed many fires are still burning there.

“The island is resilient and is starting to rebuild, however the emergency part of this incident is not over.” He urged Kangaroo Island residents and visitors to keep updated about fire conditions on Thursday, which the CFS anticipates will be “a challenging day”.

Weather bureau senior forecaster Tom Boeck said temperatures would peak tomorrow, with the mercury hitting 40C in Adelaide and the high 30Cs inland on Kangaroo Island. Winds are expected to reach up to 30km/h before a cool change sweeps through in the late afternoon to evening.

“Thursday is the windiest day because we’ve got the change sweeping in from the west,” Mr Boeck said.

Temperatures will ease on Friday, when rainfall of up to 6mm in Adelaide, and up to 10mm at Parndana on Kangaroo Island, is also predicted.

Mayor Michael Pengilly said farmers were still destroying stock, with “tens of thousands” of casualties expected on the island while blazes continued.

“There will be no end to this until we get substantial rain,” he said. “We just have to hope we’ve done enough to keep it quiet (tomorrow).”

How clubs are helping families save with free groceries

Industries cashing in on JobKeeper